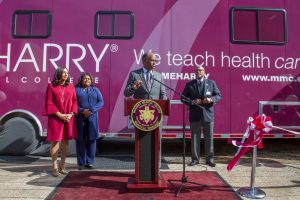 With the new Mehary Medical College mobile clinic, the “spirit of Meharry is now going to be on the road,“ said college President and CEO James E.K. Hildreth, Ph.D., M.D.

Speaking at the ribbon cutting ceremony for the clinic, Friday, February 9, 2018 on the college campus, Dr. Hildreth said the day was one of his proudest as president with the whole state of Tennessee on the threshold of experiencing what Meharry is all about. The clinic, he said, will be “giving people who much need it the care they’ve not been getting…The whole state of Tennessee is going to know what an institution we are.”

Meharry Board Chair Nelson L. Adams III, M.D. ’78, said the event reminded him of a biblical prayer. “A great book of faith and history reminds us a fellow named Jabez once said, ‘Oh that I might increase my territory.’ Our territory is about to be increased,” he said.

The mobile clinic will allow Meharry dentists and physicians to reach underserved populations in remote parts of Tennessee where obtaining health care is a challenge. The 65-foot trailer includes five treatment bays and maintains its own generator—it can operate independently where necessary and will enable Meharry to serve its mission like never before.

“There are counties throughout the state that do not have a dentist that will provide services,” said Meharry School of Dentistry Dean Cherae M. Farmer-Dixon, D.D.S ’90, MSPH ’94, FACD. There are some counties in the state, she said, with children who have dental needs that exceed the national average. The mobile clinic is designed to address the needs of those areas of Tennessee.

Meharry School of Medicine Dean Veronica T. Mallett, M.D., MMM, agreed, saying the mission of the new mobile clinic is inspiring. “Having the misfortune of not being able to access dental care really does create a tremendous health disparity,” Dr. Mallett, who is also the college’s Senior Vice President for Health Affairs, said. “Think about the impact we’re going to have in those small rural communities, in those urban inner-city communities.”

School of Dentistry Associate Dean Walter R. Owens, D.D.S., FACD, FICD, called the mobile clinic “a concept that arose from the idea of meeting people where they are. That’s historically what Meharry’s been about, filling gaps in services.”

Owens said the unit was a collaborative effort with support from The United Methodist Church and the Elgin Foundation. The mobile clinic at one time was operated by the Elgin Foundation, he said. Meharry acquired the clinic from the foundation and will continue to work with them in reaching remote communities.

Dr. Hildreth said the student dentists and physicians that work in the clinic will be “spreading the spirit of service” across the state. “They are ambassadors,” he said.