Recognizing his leadership “at the forefront of Nashville’s battle against the pandemic,” the Nashville Scene has named Dr. James Hildreth as “Nashvillian of the Year.”

An overview beginning the article summarized the story that unfolded over the course of the pandemic and resulted in their choice for this year’s honor. 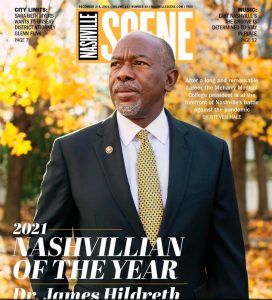 The doctor has long been working for the public good, whether as a leading HIV researcher or as leader of Meharry, and the latter role made him a prominent Nashvillian. But the pandemic thrust him into a new role as one of a few spokespeople for the science that was—or was supposed to be—underpinning our response to the virus’s horrible march across the globe…

Public health officials have been front-and-center since COVID’s arrival and have caught more than their fair share of criticism as a result. But without them, without people like Hildreth, who have devoted their lives to become experts in their field, we’d be flying blind in a hellish storm. We’re not out of it yet, but we can see the way through. For shining a light and blazing a trail where there wasn’t one before, Dr. James Hildreth is our Nashvillian of the Year.”

The Scene’s story included a question-and-answer feature interview with Dr. Hildreth covering his upbringing, his career, his evaluation of the past two years with COVID and his outlook for the future.

CLICK HERE to read the story in the Scene.