As they’ve done almost every year since 1989, a group of Nashville-area golfers has made a substantial gift to the Sickle Cell Center at Meharry Medical College in the fight against the disease.

The Nashville Duffers Golf Association, Inc., a group of 54 fans of the game, presented Meharry’s Sickle Cell Center with a check this year for $10,000 after holding a two-day tournament earlier in the year to benefit Meharry’s efforts. Since 1989, the group has given the center $171,426, including this year’s gift. 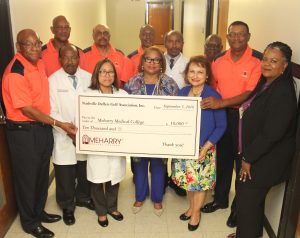 Dr. Maria del Pilar Aguinaga, professor in obstetrics and gynecology at Meharry, is co-director and laboratory director of the college’s Sickle Cell Center.

“We appreciate the work of the Nashville Duffers in raising money for sickle cell research and in support of the center,” Dr. Aguinaga said. “Since September is National Sickle Cell Awareness month, their gift is a way of fighting back against the disease.”

According to the Centers for Disease Control and Prevention, sickle cell disease predominately affects approximately 100,000 Americans—one out of every 365 Black or African-American births, and 1 out of every 16,300 Hispanic-American births. As an inherited red blood disorder, about 1 in 13 Black or African-American babies is born with the sickle cell trait. In sickle cell disease, normally round red blood cells take on a “hard and sticky” characteristic and “look like a C-shaped farm tool called a ‘sickle,’” the CDC website says.

“We are glad to be a part of Meharry’s work against sickle cell and their support for those with the disease,” said Alex Coure, Duffers president.

Nate Hill, the secretary of the Duffers, said he has been a member of the organization for over 30 years. “I’ve enjoyed the camaraderie that we have as a group of men, and also, I’ve enjoyed the effort we’ve put forth to provide to Meharry.”

Booker White, a former president and original member of the group, called the fundraising “a labor of love.”

Since 1989, the Sickle Cell Center has served as the Reference and Confirmatory laboratory for the State of Tennessee Newborn Screening Program, accumulating valuable information regarding the incidence of sickle cell disease and other hemoglobinopathies in Tennessee. As the population of the state diversifies, so has the presence of the disease in Tennessee’s ethnic and minority groups. The center tests literally thousands of blood samples a year for abnormalities.