NASHVILLE, Tenn. — Leaders from Meharry Medical College and Middle Tennessee State University signed an agreement Thursday, June 22, to develop an accelerated pathway for talented students to graduate as physicians to serve in rural areas of the state.

Meharry President James Hildreth and MTSU President Sidney A. McPhee launched the partnership at a State Capitol signing ceremony that highlighted the unique collaboration between the private and public institutions that was brokered by state officials.

“It is imperative to increase the number of primary care physicians in the state and to incentivize them to practice in underserved areas if Tennessee is to improve the overall health of its citizens,” said Hildreth, a medical doctor.

Said McPhee, “This unique collaboration between a private medical college and a major public comprehensive university is just the right catalyst to spark true change for the benefit of the people of the great state of Tennessee.”

Hildreth said the health status of Tennessee is among the worst in the country, with the state ranked in the bottom five for many important health metrics. One reason, he said, is the fact that there aren’t enough doctors to care for those who are sick.

The agreement, McPhee said, will help accelerate the production of physicians by creating a six-year pathway for selected high-ability students to attain a bachelor’s degree at MTSU and a medical degree at Meharry.

MTSU and Meharry will develop a three-plus-three-year program that will allow students to enter MTSU as undergraduates, then matriculate at Meharry for a medical education, earning degrees from both entities.

McPhee and Hildreth said officials from both entities are already working to develop a joint admissions process and criteria for selection into the program. They hope the program will be able to accept students at MTSU by the Fall 2018 semester.

Students selected for the program would be eligible for financial aid from a $750,000 commitment put forward by the state — if they commit to working in underserved areas of Tennessee for a specific duration to be determined.

Krause said THEC was “particularly excited about the possibility for graduates of this joint program to serve as health care providers in our most needy areas.”

He also said the partnership was “exactly the kind of collaboration we need to reach our state’s Drive to 55 goal,” which calls for 55 percent of adult Tennesseans to receive a post-secondary credential by the year 2025.

“Innovative, collaborative approaches like this partnership are exactly what we hope will materialize across this state as we try to increase the number of Tennesseans with a college degree,” Krause said.

Ketron said the arrangement may be the first partnership of its kind between a private college and a public university.

“To my knowledge, this is the only partnership of this magnitude anywhere in the country,” he said. “When I mention this partnership to people, it becomes a ‘wow’ moment, because it is such a game changer.”

“This will benefit the entire state,” said House Speaker Beth Harwell, who was among several lawmakers in attendance at Thursday’s signing ceremony. “It is innovative, and I applaud the leadership here today for working on this endeavor for quite some time.”

Founded in 1876 as the Medical Department of Central Tennessee College, Meharry was the first medical school in the South for African–Americans. It was chartered separately in 1915.

Hildreth said Meharry “has a strong, enduring legacy of training primary care physicians who practice in underserved areas throughout the country and Tennessee.  Of the Tennessee students enrolled in our schools, about half stay in Tennessee to practice medicine or dentistry.”

Hildreth said MTSU’s reputation and results as one of the state’s leaders in undergraduate education and a top choice for students from Tennessee made the institution a great choice for the collaboration.

McPhee pointed to MTSU’s newly built and renovated Science Corridor of Innovation, which houses state-of-the-art equipment and laboratories for its College of Basic and Applied Sciences, as a key asset in the collaboration.

MTSU’s $147 million Science Building, which opened in 2014, is among the most advanced undergraduate science research and teaching facilities in the nation. It is the largest single investment by the state of Tennessee on a higher education campus.

“MTSU is the No. 1 producer of college graduates in the Greater Nashville region and boasts some of the most innovative partnerships in Tennessee higher education,” McPhee said. 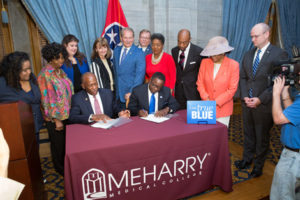