By Cynthia Yeldell Anderson—Third-year medical student Mekdes “Duni” Getaneh is a founding member of a national organization helping to bring comfort and healing to people with Alzheimer’s.

Getaneh is a board member of Alzheimer’s Buddies, a national organization that pairs college students with people living in nursing homes who have been diagnosed with dementia for weekly one-on-one visits. She is using her platform to bring awareness to the unique challenges African Americans with dementia face.

Studies show improvements in the health of patients who have regular contact with people whom they make a connection with. To account for this, Getaneh wants to recruit more African-American students to take part in the program and hopes to inspire a new generation of caregivers and clinicians. 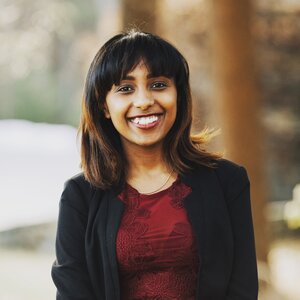 “I would like to have students of color doing more visits,” Getaneh said. “If someone who looks like you comes to visit you it makes a difference in lowering the social isolation and disengagement that often comes along with the diagnosis of AD.”

Getaneh said her hope is to expand the effort to HBCUs such as Fisk University and Tennessee State University. She would also like for graduate students at health science centers like Meharry to form Alzheimer’s Buddies chapters.

In addition to weekly visits, volunteers with Alzheimer’s Buddies write letters to the families of their buddies, highlighting the positive aspects of their weekly visits, suggesting activities families can do together, and helping reconnect family members with their loved ones.

Nursing home residents participating in the program are reported to show a decrease in depression and increased participation in social activities outside of Alzheimer’s Buddies visits.

Getaneh first became involved in the organization when she was referred to Alzheimer’s Buddies after volunteering for another program as an undergraduate student at Gordon College. Getaneh was assigned to spend time with a woman with Parkinson’s. Word of her connection with the Parkinson’s patient made it to students at Harvard College who invited Getaneh to join them in launching Alzheimer’s Buddies.

“Her life was so transformed and all we did was try on dresses or read a newspaper or watch Netflix,” Getaneh said of her experience with the patient with Parkinson’s. “I learned that I can make all of the difference.”

Getaneh continued to foster her interest in helping dementia patients through her international research. She studied approximately 25 thousand people enrolled in a project in the UK to try to understand if depression and anxiety play a role in accelerating cognitive decline in older adults.

“My research was the first to ever look at the potential association between anxiety and cognitive decline, so that was exciting,” Getaneh said. “This was a key research topic because we were able to identify that depression and anxiety are associated with an accelerated executive function decline in older adults.”

Her abstract was selected to be presented at the Alzheimer’s Association International Conference in Amsterdam and she was recently awarded the Alliant Health Solutions/National Medical Fellowship Alzheimer’s or related Dementia care scholarship for her efforts in the field.

In addition to her research, Getaneh was able to establish the first international Alzheimer’s Buddies sister program at University of Exeter in South West England.

With the onset of the COVID-19 pandemic, Alzheimer’s Buddies are now holding virtual visits, as well as sending care packages and writing letters.

Getaneh said her mission is not only to expand the Alzheimer’s Buddies program to colleges nationwide, but also to end the disparities gap for African Americans and people of color with Alzheimer’s.

To begin addressing this need, Alzheimer’s Buddies is piloting a new community-based model in St. Louis with Wesley House (wesleyhousestl.org), a deeply-rooted non-profit that has been supporting an underserved, African-American neighbourhood in North St. Louis since 1903. With support from social workers and community ambassadors, local college students will be paired with seniors with dementia being cared for at home to meet weekly at Wesley House. For families caring for their loved ones in the community, the Alzheimer’s Buddies program will provide a much-needed break from caregiving. For volunteers, this will be an incredible opportunity to stretch themselves to connect with someone who grew up in a different time and in a different context. This community-based model will be used as a template for launching similar initiatives.

Getaneh is on a social justice mission to bring equitable treatment to people of color facing Alzheimer’s and increase their standard of care. She is asking the Meharry community to partner with her on her mission.