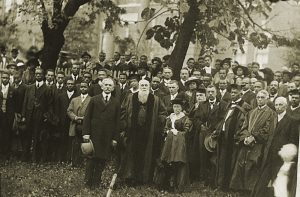 It is appropriate during Black History Month to showcase the vitality of Meharry’s history, said Library Executive Director Sandra Parham. “The evolution and history of Meharry Medical College is phenomenal to read,” Parham said, “However, its compelling story is best documented in the remarkable collection of images that memorialize the spirit of Meharry.” Parham, who has been at the library’s helm for two years, said the goal of the exhibits is to expose students outside of Meharry to its rich history and sustained future as the College approaches its 150-year anniversary.

The library is crafting small, short-term exhibits representing the College in a number of Nashville-area academic libraries, with standard exhibits scaled to fit their space specifications. Exhibits include posters of a historical Meharry scene paired with related artifacts and a brief description. Exhibit cases will contain more historical memorabilia.

Items on display across the various sites include photos of Meharry’s football team, Greek organizations, the Meharry Singers and Women of Meharry—including Ollie Davis Bryan, Georgia Esther Lee Patton Washington, Hulda Margaret Lytle, Josie E. Wells, Mrs. John A. Anderson, Sarah Hubbard and Dorothy Brown. Some artifacts will date back to 1876, the year of Meharry’s founding as the Meharry Medical Department of Central Tennessee College (renamed Walden University in 1900). By 1915, the academic institution came to be known as Meharry Medical College.