Meharry is one of Nashville’s ‘jewels,’ Tennessean article says

Meharry is one of Nashville’s ‘jewels,’ Tennessean article says

The headline in a story in Monday’s Tennessean says the current COVID-19 pandemic “put a spotlight on Meharry Medical College” calling the College “one of Nashville’s ‘jewels.’

The article, written by Adam Tamburin, details the changes in Meharry’s local and national profile as a result of the College’s role in the battle against the disease. As of this posting, the full story is available for Tennessean subscribers only.

“As the pandemic stretched into winter…Meharry and its president, Dr. James Hildreth, became faces of the city’s pandemic response,” the story says, “upping the institution’s profile and leading to a surge of good will officials hope will mark a turning point for one of Nashville’s hidden gems.” 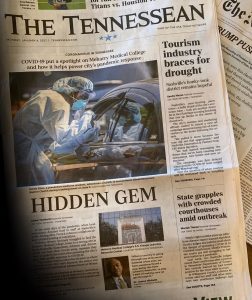 The article notes Dr. Hildreth’s regular appearances at Mayor John Cooper’s press conferences since the March beginning of the pandemic as key to raising the Meharry president’s profile in the community, “explaining the contours of viral pathology in a quiet, steady voice.” Mayor Cooper went as far as to call Dr. Hildreth “Nashville’s family doctor…There’s quite a lot of science he’s been teaching us.”

The story says that Meharrians operated the city’s three testing sites conducting more than 300,000 free tests with numbers continuing to rise. The article quotes Dr. Alex Jahangir, leader of the Metro Nashville Coronavirus Task Force as saying the city’s effort against the disease “would not have been at all where it is now” without the College. Quoting the article:

“These guys from the very beginning have been at the front line of this,” Jahangir said. “They had the power of the people and the knowledge.”

Meharry’s role in confronting the pandemic and COVID-19’s disproportionate attack on minority communities is covered in the article, saying the College’s “mission has never been more relevant…‘It’s been a problem for me sort of witnessing so many people dying, who I think didn’t have to die,’ Hildreth said.” Through the College’s testing efforts, vaccine trials and research efforts, its commitment to the community and its mission is on stage like never before in the 144 year history of Meharry Medical College.

Mayor Cooper is quoted in the article putting the College’s role in perspective: “It reminds Nashville…Meharry is really one of our jewels and always has been, but now it’s front of mind.”

The full story is available to Tennessean subscribers only—CLICK HERE.