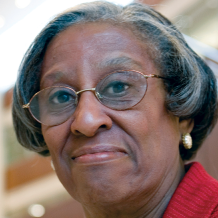 Gloria Johnson-Powell, M.D. ’62, one of the first women to hold a tenured faculty post at Harvard Medical School, has died at the age of 81.

Dr. Johnson-Powell was a 1958 graduate of Mount Holyoke College in South Hadley, Massachusetts, where she majored in economics and sociology. She then went on to Meharry Medical College in Nashville, Tennessee, at a time when the civil rights movement was gaining strength. Johnson-Powell became active in the movement. She even considered dropping out of medical school to devote more time to civil rights activism. However, Dr. Martin Luther King Jr. urged her to complete her studies. She did.

After graduating from Meharry in 1962, Dr. Johnson-Powell completed her residency at the University of California, Los Angeles. She then joined the faculty there. After teaching at UCLA for 15 years, Dr. Johnson-Powell became a professor of child psychiatry at Harvard Medical School. Later, she served as a professor of psychiatry and pediatrics at the University of Wisconsin School of Medicine and Public Health. There, she also served as associate dean for cultural diversity.