In 1951 John W. Jackson, M.D. received his white coat from Meharry; which proudly signified that he had completed medical school and was now a doctor. Today, 66 year later, Jackson returned to Meharry for another white coat, this one for his granddaughter, Brittany Feaster.

“I’m here today because of my granddaughter being accepted in the freshman class,” said Jackson, 97 who cloaked his granddaughter during the School of Medicine White Coat Ceremony on August 11. “We have six medical doctors in the family and she’s the latest to enter. We feel we can be of service to humanity because there is so much need.”

Feaster who is a member of the 2021 freshman class, the largest class the enter Meharry’s medical school, will graduate in 2021; precisely 70 years after her grandfather.

“It’s phenomenal to see that legacy come completely full circle,” said Feaster who is a native of Winston-Salem, North Carolina.

Considered a rite of passage for health care professionals, the donning of a white coat symbolizes the beginning of the journey to become a certified health professional. Through the ceremony, in the presence of family, first-year medical students learned the necessity of balancing excellence in science with compassionate patient care. This ceremony helps identify the characteristics of the complete doctor and provides a contract for professionalism and empathy in medicine.

“It represents everything we’ve done so far to get here. Our dreams are finally tangible,” said Yvonne Cotterell, a first year medical student from Dix Hills, New York.

They then recited the Oath of Commitment which noted the pursuit of excellence in the medical career.

The speaker was Assistant Professor of Pediatrics Dontal Johnson, M.D., a graduate of Meharry’s Class of 2014.

Jason Field, a freshmen from Milan, Tenn. who received his white coat during the ceremony was excited to receive his white coat and the responsibility that goes along with it.

“It’s a rite of passage. I’ve been waiting on this opportunity for a long time, but the real work starts after today,” Field said. 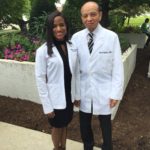 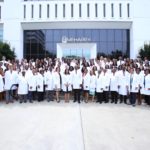 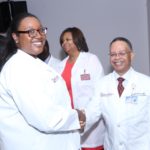 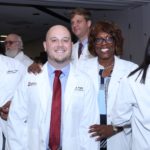