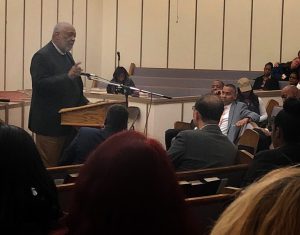 The “Community Listening Session” is a component of the Stakeholder Work Team established by Meharry President James E.K. Hildreth, Ph.D., M.D. to examine new models for indigent care in the city. The community sessions are a forum for those concerned about the future of the hospital in light of Mayor Megan Barry’s announced intent to close inpatient services there, and Meharry Medical College’s recent partnership with HCA Healthcare to train medical students at TriStar Southern Hills Medical Center.

A variety of perspectives were represented, from hospital staff and physicians to former patients of the facility who, when they were ill, had no place else to go for treatment. Meharry’s 14-decade history of serving the underserved of Nashville was on display, as was its long-established record of care within the city’s black community. Many speakers said they had strong ties to Meharry—they were born at the college’s Hubbard Hospital, as were their parents and family members.

The Stakeholder Work Team will be holding further community meetings in other areas of the city to gain an extensive body of citizen opinions and input. For more information on the team’s process, or to leave comments with the team, CLICK HERE.

For Nashville Public Radio’s story about the meeting, CLICK HERE.