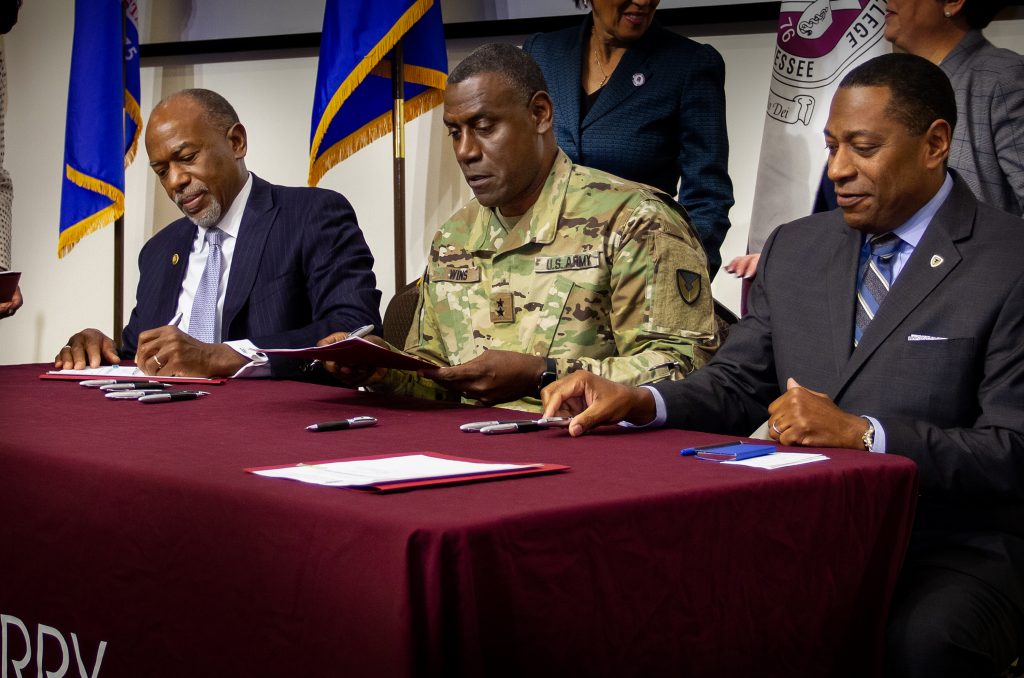 On October 25, 2018, Meharry Medical College entered into a Cooperative Research and Development Agreement, or CRADA, between Meharry and the U.S. Army Research, Development and Engineering Command (RDECOM) setting the stage for collaboration in biomedical research and innovation between the organizations.

The joint agreement was established to advance research and development in the fields of bioinformatics and data science. Meharry and the U.S. Army will collaborate on research, share resources and ultimately accelerate the transfer of federally-funded technologies to the private sector across shared areas of interest.

In remarks to those gathered for the signing, Maj. Gen. Cedric T. Wins, commanding general of U.S. Army RDECOM, said collaborations with institutions like Meharry give the serving military a “better chance of getting home safely to our loved ones.”

Meharry President James E.K. Hildreth Sr., Ph.D., M.D., described the collaboration between Meharry and the Army as an effort to “protect the protectors” during remarks at the signing ceremony.

“Meharry has a long and proud history of collaborating with government and industry to solve the health challenges facing our world’s vulnerable populations,” Hildreth said before the occasion. “Through this agreement, Meharry scientists will now have the opportunity to work alongside the best research minds in the armed services to pursue crucial breakthroughs in bioinformatics.”

Also on the dais was Meharry alumnus Eric L. Moore, Ph.D. ’92, director of the U.S. Army Edgewood Chemical Biological Center. Under the first Joint Work Statement, Meharry will work with ECBC, the nation’s principal research and development resource for non-medical chemical and biological defense, to improve the speed and accuracy in which viruses are identified in clinical samples.