The 142nd Convocation Signals the Start of the Academic Year

The 142nd Convocation Signals the Start of the Academic Year

The 142nd Convocation of Meharry Medical College, the ceremony marking the beginning of the academic year, was held Monday, October 9, 2017 at The Cal Turner Center for Student Education.

“It is energizing for me to know that seated in this room are the future leaders of health care,” he said.

To the future physicians, Carpenter spoke directly about keeping the humanity of their professions in mind. “We use a lot of big words in health care. It sets us apart because of what we know, but it can also set us apart from our patients. So remember, you’re helping people—you must meet them where they are. And understand, that often they are overwhelmed by the world that you live in.”

Carpenter said change is at the center of health care today. “Health care is an industry that more than ever before is ready to push the lines of innovation and to respond to the world as it is evolving.” He pointed specifically to new technologies, but continued to come back to service to patients.

“As you begin this academic year, I encourage you to think about how you as health care leaders play a role in the future of our industry,” he said. “Begin by listening. Learn from one another. Engage in healthy dialogue and debate. And, don’t shy away from new ideas. This is what great leaders do in time of change.”

Students were recognized for academic achievement and scholarship from Meharry’s three schools of study: the School of Medicine, the School of Dentistry, and the School of Graduate Studies and Research. Awards were given for outstanding achievements by alumni. 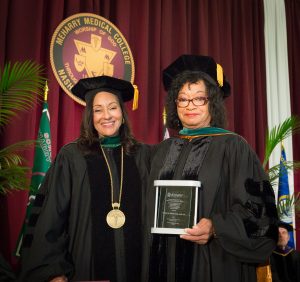 The Axel C. Hansen, M.D. ’44 Distinguished Physician Award was presented to Natalia Tanner-Cain, M.D. ’45,accepted by her daughter, Anita Leslie Cain, M.D. Tanner-Cain’s career in pediatrics was marked by obstacles she overcame as an African-American physician in Detroit, eventually excelling to the pinnacle of her field. Accepting the award, her daughter told the audience, “If my mom was here, she would say she’s just a little girl from Jackson, Mississippi trying to make an impact in the world.”

The Fred C. Fielder, D.D.S. ’60 Distinguished Dentist Award was presented to Cecil P. Stancil, D.D.S. ’04. Stancil was recognized for his unwavering dedication to the College, marked by his strong, consistent support. “I could never repay Meharry Medical School of Dentistry for what they’ve done for me,” he said.

The Harold D. West, Ph.D. Distinguished Biomedical Scientist Award was presented to Robert C. Walker Jr., Ph.D. ’07. Walker, chief of the Career Development and Outreach Branch at the National Institutes of Arthritis and Musculoskeletal and Skin Diseases at the National Institutes of Health in Bethesda, Maryland, was recognized for the many achievements in his career. Speaking directly to Meharry students in the School of Graduate Studies and Research, he said, “Your altruism and dedication to the advancement of science will be impactful for many generations of people around the world, for you are the link to common and rare diseases.” Referring to his family members in the audience, Dr. Walker spoke directly to his nephew. “I want you to see this, because this is your future.” 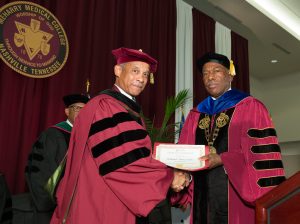 Dr. William P. Davis, D.D.S. ’92, MSPH ’97, associate professor in the Department of Restorative Dentistry, was presented with the College’s Exemplary Teaching Award. “Teaching is a gift with an anointment from God and it is with my most infrangible gratitude that I thank him for the opportunity and the privilege to teach here at this place called Meharry.”

Meharry President James E. K. Hildreth, Ph.D., M.D., spoke with pride in his closing remarks. “The Bible says that you’ll know them by their fruit. And you’ve met some of our fruit. I hope you’ll understand Meharry’s a really tremendous tree.”

Following Convocation, a wing of The Cal Turner Family Center for Student Education was dedicated to John K. and Verna P. Merrell in recognition of their “outstanding contributions and commitment to the students of Meharry Medical College.”

“Scholarships are one of our highest priorities to make sure our students can still make the choices they are making, and the almost $2 million endowed scholarship from the Merrells is a very significant part of that,” Dr. Hildreth said. “As long as there’s a…Meharry legacy, the Merrell name will always be a part of it.”

Verna Merrell told attendees of their support for Meharry, “It’s enriched our lives so much, the communication between our families and [Meharry]. Just keep yourselves open to whatever might be coming good to you, cause it came to John in a special way.”

The Merrell’s daughter, Liz, told the crowd, “There was nothing more special to them than the mission of Meharry, and it grew over time. It is you all who honor us because we can’t do what you do. And we need you to keep doing it.”